My 1st voting experience was as a child of 6 or 7 years old in a Brooklyn voting booth, pushing the levers for my elderly grandmother. She was a Panamanian immigrant who became a naturalized citizen. My 1St time pulling the levers for my own vote was a budget vote for the Malverne school district. I walked across the street senior year on my lunch break and voted. I was 18 and had become a registered voter a few weeks prior. Those experiences with my grandmother and as a teen planted the seed that voting was important. It was impressed upon me that as a 1st generation West Indian African American female people had fought and died for my right to vote. I never lost that passion. However, it’s rare to find that passion for voting in others my age and younger. That is until I ran up on the Jewel Gatling, @the_bkc on twitter. This young woman was full of fervor for all things political, social and otherwise. She recently became the chair of the Suffolk arm of the Virginia Young Democrats. As we approach state and elections in a few weeks and next year’s midterm congressional elections, I wanted to talk with Ms. Gatling about so voting and politics. See our conversation below 😉 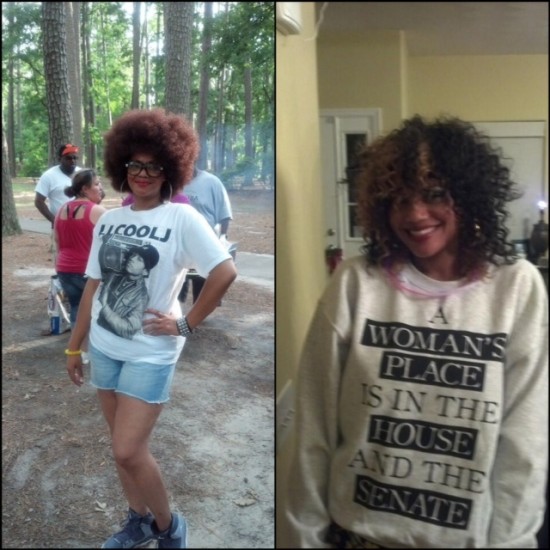 Brown Sugar – 1st as always “When did you fall in love with hip hop?”
Jewel Gatling- In 1992 A Tribe Called Quest “Scenario” was repeatedly played on my walkman every day as I walked to W.E.Waters Junior High. However I didn’t fall head over heels in love with the culture of Hip Hop until 2years later, in 94 when Biggie dropped Juicy!! I don’t know what it was but I can clearly remember hearing the lyrics over my alarm clock radio and thinking “I GET IT”. From that moment I knew I was part of a culture that I totally understood and more importantly a culture that understood me.
Brown Sugar- Dope! Let’s discuss the scenario of voting. I shared my 1st voting experiences, what were yours?
Jewel Gatling- My mother would ALWAYS take me with her to vote. I can remember going as a kindergartener, strolling right on into the voting booth and would stand with her as she cast her vote. Afterwards we would go out to eat with my Grandparents. Voting was an event in my household, a day to be celebrated. I was taught at a very early age that voting was my duty as an American Citizen.

Brown Sugar- Can you share a personal voting story that sticks out to you with the readers?
Jewel Gatling- November 2012, Election Night. I’m in the ballroom of the Downtown Suffolk Hilton with the volunteers that for a 5 month+ period had become family. Constantly refreshing my browser I saw that the city of Suffolk was going to go for President Obama. We did it, WE DID THIS. Late nights, early mornings, numerous “stop calling me…CLICK” phone conversations were all justified by the re-elections of President Obama.

Brown Sugar- So you’re chair of the Suffolk Young Democrats. How did you become involved with the Suffolk branch of the Virginia Young Democrats?
Jewel Gatling- After volunteering with Organizing for America (OFA) we were encouraged to stay involved with our local political organizations. It was also during my OFA days that I realized, hey, I’m digging this stuff called politics and the whole “you can make a difference” is actually true…go figure!!! While attending my first Suffolk Democratic Committee meeting I connected with a former OFA volunteer, James McCollum who wanted to start the first chapter of the Young Democrats in Suffolk. He saw a need for young adults in our city to become active, enlightened and then encouraged to participate in local politics and civic action.

Brown Sugar- You talked about young people, why should millennials vote in local & state elections?
Jewel Gatling- I think I stole this from twitter, but it is the truth: “You may not be into politics, but politics are into you”. Student Loans, Interest Rates, Jobs, Working Wages, Equality, Healthcare, these aren’t just talking points for television pundits, but these are real life issues that affect young adults, whether you like it or not. I have a real problem with just allowing someone to making decisions that will impact my life without my voice being heard on the matter. When you fail to vote you do just that, you remain silent and that silence then becomes an all access pass for those who are suppose to represent you to do whatever they want, whether its beneficial to you or not. When you don’t vote, you are forfeiting your right to be heard; you invalidate your importance in decisions that are being made for you by others.
Brown Sugar- YESSSSS MAAM! I’m here for all of that. *okay goes back to being a professional*

Brown Sugar- What issues stand out to you in Virginia as well as in the rest of the nation?
Jewel Gatling- I’m concerned that the importance of the decision made by SCOTUS regarding the Voting Rights Act earlier this year has been lost in the shuffle of our day to day controversies. Days after SCOTUS told the minorities “you’re fine, you don’t need us anymore” states like TX, NC and VA made a mad dash to changing voting laws that would oppress the minority voter for no other means then unfairly controlling the outcome of elections. Congress must work together (ok I giggled while typing that) to come up with new verbiage that will protect the rights of minorities from those who go out of their way to deny our right to vote. Those laws are used to suppress the votes of minorities because THEY know our vote DOES matter!

Brown Sugar- Any aspirations to become an elected official?
Jewel Gatling- NO….next question LOL
Brown Sugar- Please note that after this interview Ms. Gatling was spotted on social media rocking a dope sweater about women being in politics. *Brown sugar side eye* We have posted the proof with this article and will refer to this interview WHEN she runs! lol

Brown Sugar– Also on social media Lupe Fiasco & other conscious folks have spoken out about not voting for a variety of reasons. Why shouldn’t we listen to them?
Jewel Gatling– I agree that there is a need for social and civic action beyond the voting booth. However, when I hear the “Lupes” of the world proclaim that voting is a waste or voting does not matter, I think to myself, they have no idea that they are helping the Oppressor. Lupe to me is a pawn, knowingly or not, used by those who wish to control the vote, control my community, and control my race. His rants are targeted to young people and that is really upsetting. You would think it was common knowledge that anything someone is willing to kill for must be important. People were killed because they wanted to vote. Let’s not forget that the Ku Klux Klan wasn’t started to just scare Blacks, it was started to scare Blacks away from VOTING. Lupe’s discouragement of the positive act of voting is both disappointing and hurtful especially to minorities who have been systematically disenfranchised for centuries.
Brown Sugar- Welp! And there you have it folks. Jewel Gatling speaks truth to power daily, on and off line. I’ve included her contact info below and I hope that her passionate words serve to inspire those of us in our 20s and 30s to GET INVOLVED.