The film Brown Sugar was released in 2002. Fresh Radio started in October 2010 I started writing a culture column on the station’s site shortly thereafter. When we discussed the name for the column Brown Sugar was the first and last thing that came to mind. 8 years after the film had been released and it was still present in my thoughts. Lots about it it stayed with me. Lines, laughs, and love,there are lots of reasons the film appealed to me. I love Syd Shaw’s character and her love for hip hop. I started most of the interviews on the site in the same way that she does in the film as a hat tip to the character, “When did you fall in love with hip hop?”. I rewatched the Sanaa Lathan & Taye Diggs urban classic recently and remembered why I loved it. 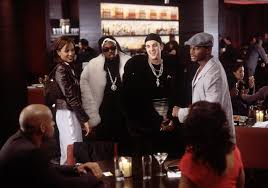 “Like the grinch who stole hip hop, what you gon go back to whoville & give all the hip hop whos they  publishing? Cabbie laughing hard at Dre when he decides to leave Millennium Records