Reflections on the effects of capitalism and latent puritanism on the working class and the accused.

Some in our society are more outraged over the destruction of buildings than they are about the state sanctioned destruction of human lives. Like, how did we get here? I took a trip through my thoughts to examine a few possibilities. Some violence is okay in our society, some groups are allowed to respond with rage. However we have never been, we’re told violence is not a solution and that it is counterproductive. Last time I checked no one was spitting that rhetoric at the Dept of Defense but ok. When we watch footage from the 1950’s and 1960’s local and federal officials loveeeeeeeed to tell African Americans not to gather and not to march and not to fight back. However I missed when they gave that message to the Klan and other citizens who were actively murdering and terrorizing us. But we gotta chill? I feel like the narrative hasn’t changed much. We need to calm down but no one is telling police forces hey maybe you shouldn’t be so quick to harass, chase down and shoot people huh? Why because I realized people largely believe we deserve it. They are blind and dumb to the fact that we are targeted and wrongfully arrested on a frequent basis. When you hear people say well if you don’t want to get shot don’t run from the police, you just gotta take a moment and unpack what they’re really saying and thinking there. The fact that we have to share the world with such ignorance and disregard for the truth is enough to make you want to HOLLER. I feel like I’m pretty much alternating between different shades of anger with bursts of happy and chill. That’s not healthy. So l decided to write to vent some of my frustration and help myself sort through the madness.

I’ve been in deep thought since we lost Trayvon Martin. I’ve experienced collective trauma with my social media community with each woman and man lost at the hands of law enforcement and otherwise. I’ve examined events and reactions with the twitters, rebutted folks who have all kinds ideas about violence, racism, and other related issues. Basically I’m tired. Tired and angry. The people on the ground in these cities and online are tired and angry. The families and the communities who lost these brothers and sisters are TIRED and ANGRY and NUMB all at once. But there are many people online and on the news who don’t “understand” our anger and our rage. Then there are those who understand but don’t think violence is a valid response. Here’s the thing, I think it’s possible to vary our responses to these atrocities. So I say express the rage and while that’s happening if you wanna pray then pray. And while we’re at it, if you think the community should organize and contact legislature then do allllll of that. We don’t have to diss one to give value to another, they are all NECESSARY. 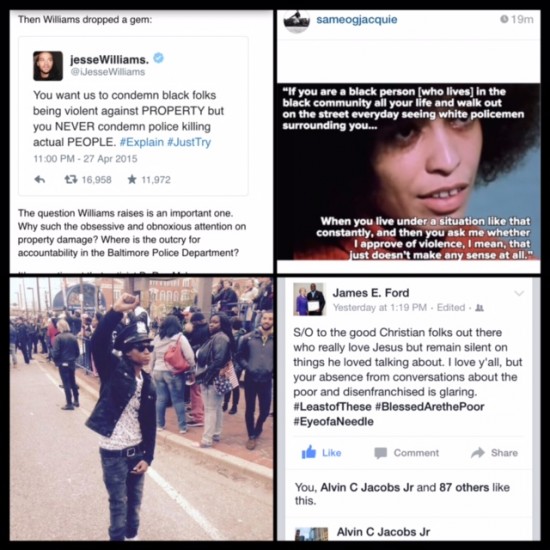 Look at the statistics for Freddie Gray’s Baltimore neighborhood. Besides excessive policing these neighborhoods rarely receive any support from the cities they live in. It’s criminal. On top of this layer racism and years of discrimination and you have rage that has been simmering for centuries. Why are the people of Baltimore so angry? The real question is why aren’t you JUST as angry?  If you know me then you know violence is NOT my default. And while I’m not personally violent I will by no means tell people that their violence is counterproductive or that people in power will take them less serious because of it. That’s nonsense in my opinion. ( I mean the majority of businesses and corporations have insurance, so really we’re upset about the appearance of destruction and the inconvenience of it all?) It just seems to me like someone is always concerned with our violence and not the violence being perpetrated on us. The violence that seems state sanctioned and all too common. The violence that we are reacting to seems to be brushed over and explained away. And really it’s time we find a way (or a few ways) to combat the root causes of our protests and our rage. Build, march, rage, post, legislate, petition, and yes PRAY.