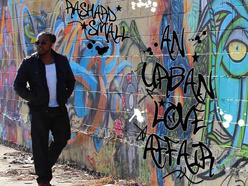 On a recent Friday night in Hampton Roads, VA I was invited to attend a listening event for soul artist, Rashard Small’s new project “An Urban Love Affair”. Small’s Soul Revolution family set the tone for the event with professional and friendly pre event moments. As we mingled it was clear that Rashard was loved by family, friends and other artists. The lobby of the Downing Gross Cultural Arts Center was filled with other local artists there to support their fellow crooner. Fans of his music call themselves Rebels and they were there in tees, wearing VIP access hang tags. Clearly this was going to be a fun night of great music.

While we waited I chatted with rock star singer and stylist K’Bana Blaq about his expectations for the album and the evening. He said he expected us to embark upon “a very soulful journey”. When asked how he described Rashard’s music he said it was “honest, gritty, and raw”, a sound he said would take us “back to basics”. K’Bana was not the only Fuzz Band member in the house that night as bandmate Nakia Madry- Smith was there as well. The vocalist also doubles Lead singer of D’Nik, when asked to describe Rashard she said he was “a great performer and writer. Madry-Smith said his music was “filling the gap” and was a “welcome return of soul”. I hadn’t seen Mr. Small perform a full show since 2012 and was anxious to see how he had grown as an artist. The anticipation of all in attendance was high as we waited for the show to begin.

We entered the beautiful Ella Fitzgerald theatre of the center in Newport News, VA and were treated to a 3 song sample show of Small’s music. The catchy lead single from the upcoming project “An Urban Love Affair”, 1234eva immediately gets the crowd into the swing of things as they sing along to the catchy hook. Like most of his music the song is clearly dedicated to his beautiful wife Regina who also sings BGVs. The family affair doesn’t stop there as Rashard’s brother Demarkis Vinson also serves as co- Musical Director and drummer for the Renaissance Band who played for Rashard and his singers. The audience was then treated to a song off Small’s first project and the New Orleans tinted tune was super hot. Last up was a cover of VA’s own D’Angelo’s hit Brown Sugar. You know I dug this instantly. ?  The night was truly a love affair with soul music.

After the sampler we entered the listening suite where we heard a few cuts from the new album and watched the recently premiered video for 1234eva (watch it below).  While we listened and snacked (on food catered by Rashard, yeah he can cook too) I made my way around to talk to some more band members and finally the man of the hour. Rashard’s vocals were completed by the Renaissance Band headed by Musical Director Tavis Simmons of Band Geek Musiq. Simmons’ wife, Nu,  also sings backgrounds with Rashard. It was truly a family affair on the stage that evening. I spoke with Simmons, and he had this to say- First of all “I miss soul music”, and with this album “we’re recreating the music I grew up on”.

Finally after snatching him away from well wishers and fans I got to ask the man of the hour a few questions, the VA native was all smiles, clearly feeling all the love from the evening.

Rashard Small- Soul is a feeling, not just what you hear. You can’t just hear soul.

Brown Sugar- What’s your inspiration for being an artist?

Rashard Small- Life experiences, the ups and downs of love. My marriage to Regina is also at the center of my inspiration to write and perform.

Brown Sugar- You have your wife, your cousin, and your brother here on stage tonight. How is to work with family in this industry?

Rashard Small- It’s a blessing to have family that can see your dreams. Even though it can be difficult, having them around means having people I can trust. It’s a good feeling.

Brown Sugar-What message would give to people who have never heard of you and your music?

Visit   rashardsmall.com  and follow him on twitter @rashardsmall to find out more about when Rashard will be performing in a city near you and anything else you want to know. Rashard Small is managed by Michael Lemelle @michaellemelle